What do Muse, Silk Sonic, Lenny Kravitz, and Marvin Gaye have in common?

So what do Muse – Starlight, Silk Sonic – Leave the Door Open, Lenny Kravitz – Are you Gonna Go My Way, and Marvin Gaye & Tammi Terrell – Ain’t No Mountain High Enough have in common? (Well, besides the fact that they are all available to learn in Melodics?)

The answer is that they all feature the ‘Straight Four Snare Rhythm’, a drum beat characterized by having a snare hit on EACH quarter note of a 4/4 bar.

The snare’s sharp, attacking sound (aka “staccato”) along with the punch of the kick drum, are often one of the core defining features of a given rhythm. Snare hits can be considered rhythmic anchors that a groove can be built around.

A typical 4/4 drum beat, such as your classic rock beat, or a disco style ‘4 to the floor’ will typically feature two snare hits — usually on the 2 and 4. ‘Half time‘ rhythms will often contain only a single snare on the 3. The snare’s prominent role within the rhythm means that with only half as many snare hits within the bar, it feels as if it’s playing in half time, even if the tempo is technically the same.

The ‘straight four‘ snare rhythm, on the other hand, mimics what the kick drum does in a disco ‘four to the floor beat’, and emphasizes every single down beat of the bar, with snare hits occuring on 1, 2, 3, AND 4.

How to give your music more (or less) energy when you need it.

Now, given this, what is the purpose of having a snare hit on every beat? In what ways does this rhythm feel different from the more typical rhythms you find in modern 4/4 music?

Straight 4 Snare rhythms are often used as a way to add tension and energy in the moments before a section change in a piece of music. Alternatively, the rhythm might be used to add a sense of contrast, creating a difference between the sections that occur before or after it — listen to our straight 4’s playlist to hear it in action and train your ears.

The straight 4 snare rhythm’s presence as a rhythm played on a drum kit has been around for ages, but in the way that we are talking about today as a musical device in modern songwriting is now closely associated with soul and motown music.

Take ‘Ain’t No Mountain High Enough‘, for example. At about 1:22 in, the Straight Four rhythm makes an appearance for four bars just before a change of section. It’s a lovely moment that adds a little bit of tension immediately before launching into the next verse

This tendency for the rhythm to appear in soul and motown music isn’t just relegated to music from the 60s – more modern interpretations of the style retain the usage of this rhythm as well – as can be seen in Silk Sonic’s ‘Leave the Door Open.’

This time the rhythm appears in the final iteration of the chorus of the song, occurring about 2:40. Up until this point of the song, the chorus has a more typical rhythm accompanying it, with a snare on the 2 and 4, but for the final chorus, the straight four snare rhythm is played instead, which provides a vitality and energy that wasn’t present before – elevating it to a fitting climax near the conclusion of the song.

But MoTown and soul are not by any means the only places where this rhythm finds a home either – Muse’s ‘Starlight‘ is a great example of the Straight Four rhythm being incorporated into a modern rock context. In Starlight, the rhythm appears during the pre-chorus where it helps creates an evocative build-up towards the Chorus itself. The chorus features a more stripped back instrumentation, with no drums at all, so having a high intensity snare rhythm leading into this section creates an effective contrast, adding to the drama of the piece.

Lenny Kravitz’s ‘Are You Gonna My Way’ is another hit that uses this rhythmic device. This time, a variation of the rhythm that features flams instead of singular snare hits is a key component of the intro of the song. It’s a boisterous and attention grabbing technique that draws focus right out of the gate. It’s a bold and in-your-face moment that provides a perfect jumping off point for a high-energy rock hit. 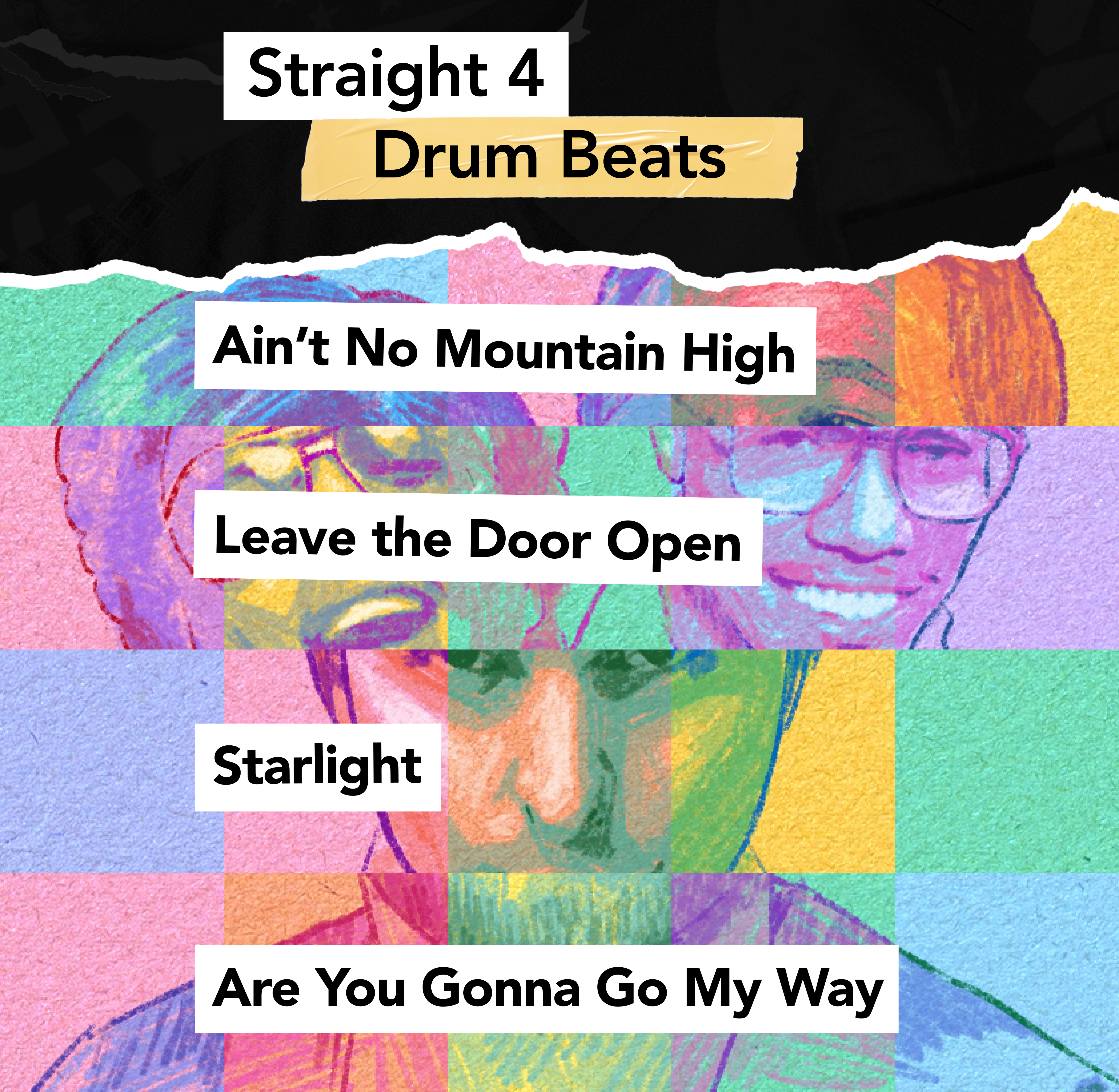 The straight four rhythm is a flexible drum technique that can be used over many genres and in many different contexts.

If you want to get a handle on how to actually play these drum rhythms – all of these songs are available to learn in Melodics as a premium subscriber:

Or keen to explore the fundamental beat? Try Melodics’ essential ‘Motown Rhythms’ course for drums, which covers the must-know Motown grooves from the 60s, 70s & 80s — of course including the iconic straight 4.