OddKidOut Talks About His New EP & Growing As An Artist

by Daren McLeod in Interviews

It has been a big twelve months for OddKidOut. He has smoothly transitioned from an Instagram sensation to the festival line ups of SXSW and Firefly this summer. In regards to production he has also been busy with the creation and release of his  new EP called “Full Circle”. The Philly producer was kind enough to answer a few questions for us about his new EP, what he has learned in the last year and his three new lessons on Melodics.

The last time we did a Q & A with you was April 15, 2016. How have things changed for you in terms of your music career in the past year?

It’s been that long already? I feel like a lot has changed in the year, specifically with my artistry. I’ve been focusing much more on my industry presence as both an artist and a producer. I’ve slightly veered off the hip-hop path (I’m still on it 100%), but have opened up my musical horizons to different genres and new musical environments that I haven’t touched before.

What is the biggest life lesson you have learned over this time period?

I’ve learned so many things, but I think one of the most important ones was to be safely skeptical of what people tell you. I’m not saying not to trust people, but to rather assess what they are saying to you when you meet them and take it at face value until you get to know the person a little more. I used to get my hopes up and immediately think big things would come of these meetings but have recently realized that I need to be wary of what actually is the truth.

It was a great feeling, I’m so honored to be a part of both of the festivals. I had performed at SXSW two years ago so I was a little more taken back by Firefly since I haven’t even gone as a concert-goer. Honestly, I felt like my friends and family were more hype than me when I found out but that’s just because I’m constantly challenging myself and looking for the next big thing to do. However, I’m really grateful and excited to play…I’m counting down the days!

Your new Full Circle EP has just been released. Tell us about the EP and how it differs from your previous works?

The EP is different than my other music because I wrote it with two other people; 1403 and Mitch Beer. Immediately, the musical content was enhanced because these two are extremely talented and we understood how to work cohesively. 1403 is from London, so he brought with him those gritty vibes that acted as a counterpart to the more vibey sound that Mitch and I created here in the states. It’s what I like to a call a “genre-blender”. While some of my other music is obviously hip-hop or soul, the Full Circle EP wanders somewhere in between there and electronic music.

Was there a change in the way you approached producing this EP compared to your previous works?

Yeah, the way we produced this record was much different because we only had about a week. Tom (1403) came over here to the US for a week and that was when we basically constructed the whole project. Working in such a small timeframe was a little difficult, but also a great tool to keep the creative juices going. The project was really an organic creation that evolved over 7 days, and I think you can feel that in the music.

1403 features in a few tracks on the EP, adding richness to each track with his vocals. How did you guys connect?

Yeah, so 1403 is on every track, whether it was his vocals or an instrument he was playing. I was actually introduced to him through Mitch Beer; that’s how we all came together for the project.

It was “Wonderful”, ha! No, but in all seriousness, it was a delight working with both 1403 and Mitch. Musically, we all are on the same wavelength so it made the process very smooth. And from just a normal life standpoint, both are my homies so it’s always great to be around friends.

You mentioned in a previous interview that you have been listening to Anderson Paak’s ‘Malibu’ album a lot and loved how it fuses old school and modern elements. What other artists or albums have you been listening to lately?

What is the single biggest skill you have developed as a producer in the last six months?

The biggest production skill I’ve learned recently was how to utilize space, and that less is more. I found that I was over-producing my tracks when really the answer was just to incorporate more comprehensible parts that didn’t step all over the main lead.

You said in an interview for Creative Masters that you don’t like to describe your sound, but if you had to it would be a mixture between electronic and hip hop. It seems that has held true with your latest EP. Was that your intention?

Yeah, I usually try and stay away from genres or labels because I feel that it becomes limiting as a producer and an artist. I tend to say that I incorporate my soul into every track I make, that way I’m open to all sorts of opportunities. For this EP, it’s a direct incorporation of both my soul, but also Mitch and Tom’s as well. That was our intention….to make a project that was gestated from our creativity, and didn’t conform to any preconceived notions.

In the same interview, you talked about using the time you walk between places, shower and when falling asleep to plan and think about the past, present and future. Are you able to go into this process and how it has helped you achieve your goals?

Yes, this is a daily routine for me. The shower is still a sanctuary for me…I’m sure I piss off my roommate by being in there for hours at a time but there’s something so relaxing about hot water and it helps me think. And still, before I fall asleep, I always always always think about the next goal in mind. I think about how to get there, what I can do tomorrow to make that happen, and then imagine what I’ll do when I finally get to it. It helps visualize the goal and helps me stay focused on achieving what I want.

You have previously said that success for you, would be to redefine the way that people listen to popular music. Are you able to elaborate on this and what it would mean to achieve this goal?

Yeah, I really just want to share my uniqueness with the world. I would love to be writing tracks for the biggest artists, but doing it in a way that is unique. For example, you can almost always tell when an artist does a track with Pharrell (or the Neptunes), his sound is just iconic. I want to do the same thing with the way that I produce my tracks.

What excites you the most about releasing three songs off your EP on Melodics?

I’m most excited for the community to wrestle with some tracks that have actually been turned into real songs. Some of my past lessons have been beats and those contain invaluable lessons, but this round is almost more “real”, as the listener can play the lesson and then open up Spotify and listen to the real track.

Are there any tips you would give to Melodics users before playing your new lessons?

LOVE. YOUR. METRONOME. It’s the most important thing in music in my opinion; be one with the metronome. With all of my music, or anyone’s music at that, being able to lock into the groove is everything. I sometimes produce tracks off the grid that are still in a pocket, so in order to play that slightly swung feel, you need to master the metronome simply on its own. And I also just want to say thank you to everyone who has been messing with my lessons and thank you Melodics for allowing me to share my craft with the world!

Pro Tips: How To Use ‘Tags’ To Learn Faster With Melodics

by Daren McLeod in Pro Tips

Over the last few weeks we have made a couple of significant changes to how content is structured in Melodics. We regraded every lesson to move from 10 lesson grades to 20 – and we’ve overhauled all the tags used to classify lessons.

These new tags are a way to navigate the main components and skills required for each lesson. They are broken up into three categories; Rhythm, Technique and Lesson Style. Using these tags, you can separate your training into these areas and work on developing each of these important skills.

Let’s say you want to strengthen your hand independence. All you need to do, is go to the lessons screen and filter by the tag ‘hand independence’. This will give you a list of lessons that we recommend you should play to build that particular skill. The lessons are filtered from easiest to hardest, which will allow you build your skills up gradually. 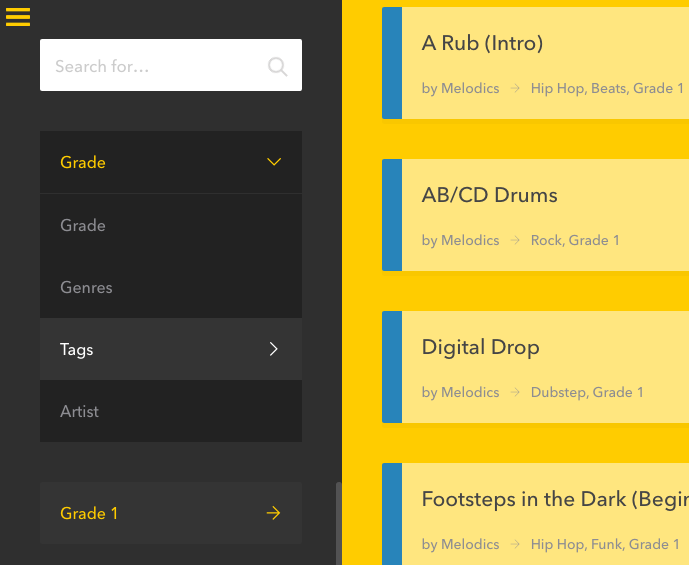 Go to the lessons screen in the app. On the left hand panel click the top dropdown menu and select ‘Tags’ 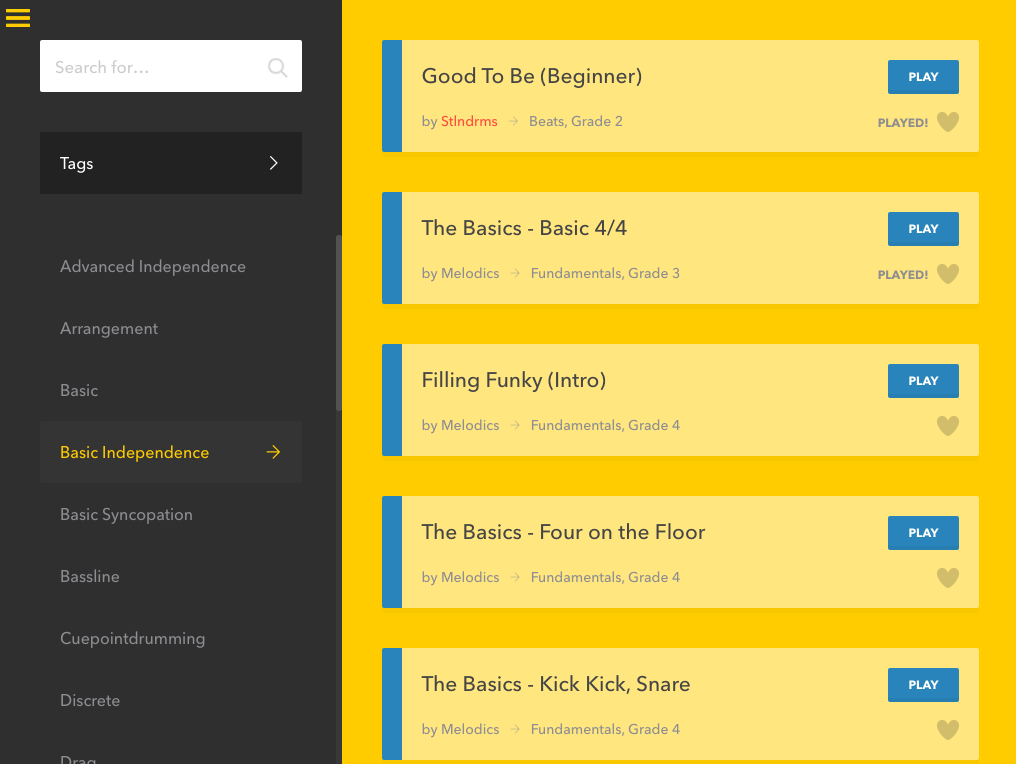 Once clicked a list of our new tags will be produced on the left hand panel.

Select a tag – For this example we have selected ‘Basic Independence’.

Once selected all our lessons that have been tagged with ‘Basic Independence’ will be filtered on the lessons list to the right. These lists will be shown from lowest grade to highest.

Tagging is particularly useful it you want to work backwards from a really challenging lesson. Say for example you wanted to learn to play Spinscott’s Jungle Break Fundamentals Vol. 1, grade 19 lesson. This lesson has the tags Endurance, Discrete and Fast. To build up the skills you need to master this lesson, you can find lower grade lessons that have the same tags, and work on building up these skills. In this case, start by filtering by the ‘Discrete’ tag. This will give you a list of lessons that require you to play rhythms consisting of individual hits, where usually no pads are played simultaneously. Justin Aswell’s Daily Warm Up’s – 16th Note Accent, grade 8 also has the tag ‘Endurance’ so this would be a good lesson to start with. When you’ve got that down, play Buddy Peace’s Desert Burner lessons from grade 9 to 11. Spinscott’s DnB Roller, grade 12 introduces the ‘Fast’ tag. You’ll notice when you get above grade 15 all the lessons tagged ‘Discrete’ belong to Spinscott. This shows you that his finger drumming style is fundamental to the ‘Discrete’ skill. If you want to play like Spinscott then that is a tag worth filtering by.

Below are all the new tags in Melodics, a definition of each one, and a example of a lesson that uses this tag.

Try tagging today and let us know how it helps you learn in Melodics. If there any other parts of the app that you want tips on, let us know via the comments section below.