Practice at your own pace with exercises

Being told to practice your scales can seem like the dentist telling you to floss… We think there’s a better way.

Introducing exercises for Melodics, repeatable drills that focus on developing muscle memory and orientation to musical patterns such as modes, scales and intervals. Exercises are a zen-like contrast to our error focussed and feedback driven lesson experience. One that instead rewards patience, taking your time and repetition.

Exercises are rep based, and help you to focus on what’s right – not what you’re getting wrong. There’s no scoring and zero focus on errors. It’s all about positive reinforcement through rep based practice.

Exercises are built into courses, and develop your muscle memory and familiarity with scales, modes and intervals used in the lessons you’ll be trying to pass. Discover the underlying musical concepts of songs and lessons through playable exercises.

The idea is to keep practicing the exercise until you feel confident and ready for the next lesson in the course. The best way to get past those progress plateaus!

Learn the theory behind what you’re playing

Exercises also relate to the wider world of written music. You may notice that the design hints at the bass and treble clef of piano sheet music. This is designed to sub-consciously develop your spatial recognition of key interval structures and make it easier for you to transfer your learning between different contexts.

Structure your learning with Melodics courses

You might want to set aside more practice time this week. We’ve made some improvements to courses, and there’s loads of fresh material to fuel your next session. From courses on learning ornamentation and arpeggios for keyboard, to new drums courses on sub-divisions and finding the funk – there’s plenty to dig into!

We’ve updated the learning screen in Melodics, and you’ll now see that courses look a little different. We’ve had plenty of feedback since we’ve released Melodics and we know that these updates will make your practice sessions much smoother. 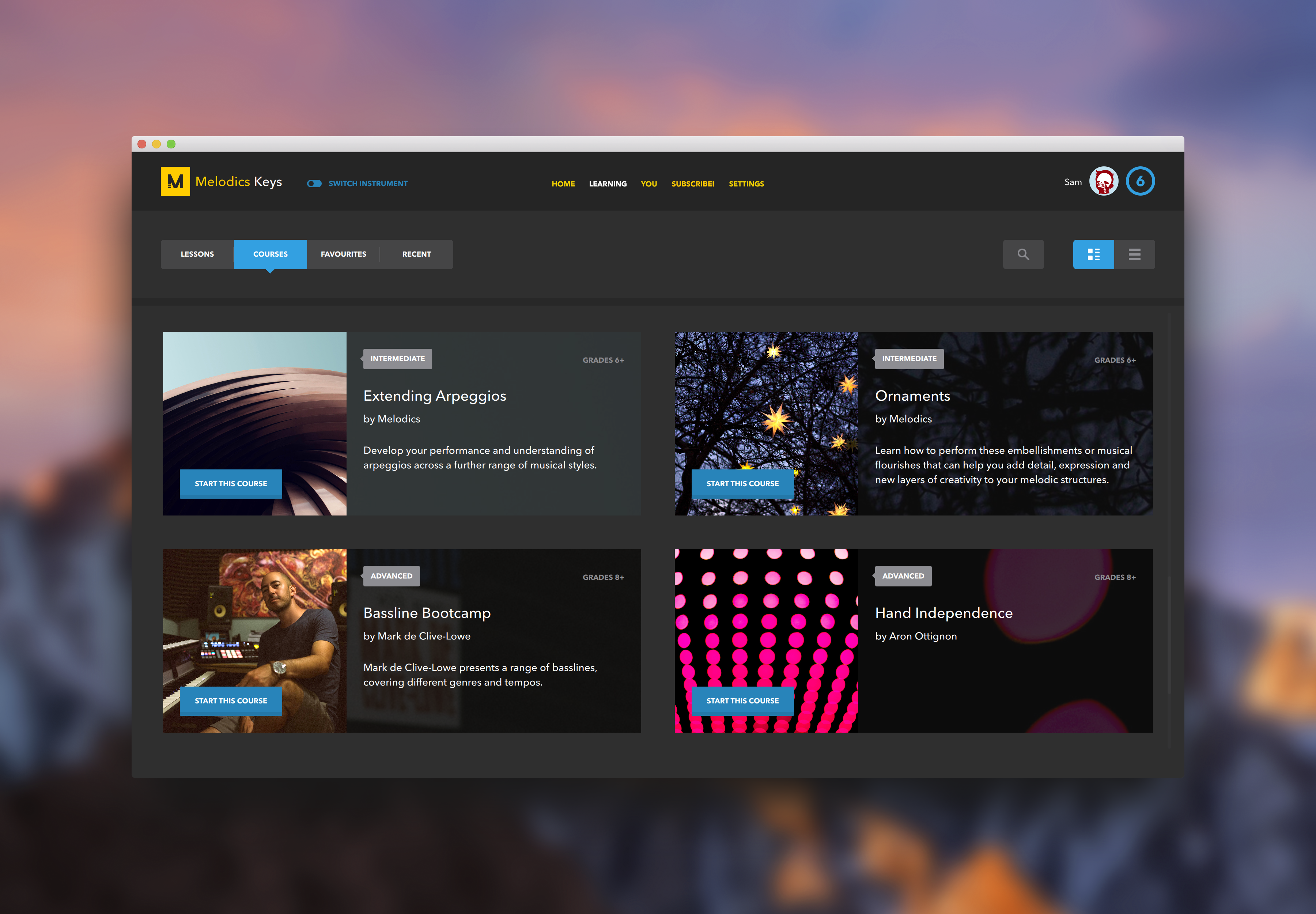 Check out these new courses you might have missed

Building Arpeggios – In today’s musical landscape, it’s pretty hard to listen to anything without coming across arpeggios. Whether you’re into funk, classical music, or witch house, arpeggios serve as a key part of arranging, producing, and composing. Arpeggios are a crucial technique for arranging, producing, and composing. But what are they exactly, and how can you play them?

Ornaments – In performing, ornamentation can help you add detail, expression, and new layers of creativity to your melodic structures. In this course, we’ll be taking a look at ornaments, and not the kind you see around the holidays! We’ll practice adding ornamentation so that you’ll feel comfortable trying it out in your own music!

Ain’t it Funky – Expand on a basic Funk beat with a series of variations in the style of Clyde Stubblefield. The variations will focus on kick, snare, open hi-hat placements and tom fills. Structure what you’ve learned into a song format to complete the course.

And if you’re interested to know what’s on the release radar. Here’s a sneak peak at some forthcoming courses!

Ready to jump back into Melodics? Try out a course now.

A fresh face to learning in Melodics

by samstokes in Melodics, Uncategorized 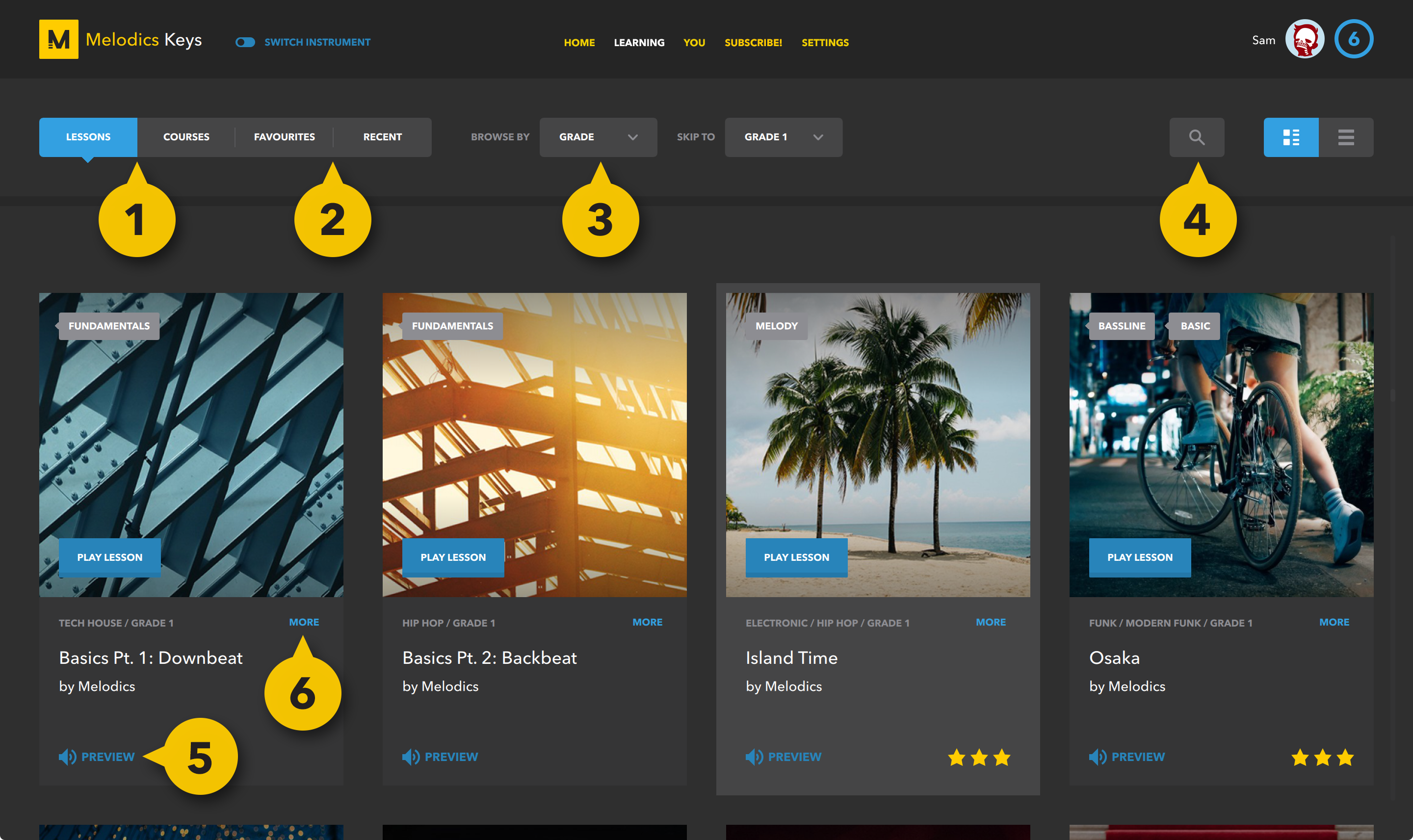 We’ve made a few updates to the learning and courses section in Melodics based on your feedback. Here’s a quick guide to what’s changed and how to find your way around your next practice session.

Take a look and start practicing.

Based in Las Vegas, Nevada, Sherry St Germain is a classically trained multi-instrumentalist, producer, and singer/songwriter. Over the last fifteen years, Sherry has applied her diverse skill sets and energy to high profile film and television soundtrack work, theatrical live performances, studio sessions, and her Akylla duo project with Saratonin.

Most recently, Sherry has been involved in production work and collaborations with a who’s who of EDM and dance music talents including Steve Aoki, Excision, Stafford Bros, Revolvr, and Genesis. From playing a flying piano with Cirque Du Soleil to writing music for male stripper comedy Magic Mike, and beyond, she’s never short of a story or ten.

In this Q&A, Sherry discusses how she got started playing music, entering the EDM scene, and how the mechanics of music keep her inspired and interested.

Play lessons by Sherry St Germain and Akylla by following the links below to open the Melodics app:

How long have you been working in the EDM scene for?

Since around 2015. Before that, I did Film and TV soundtrack work for twelve years; twenty-four-hour turnaround jobs. I worked on Magic Mike, Something Borrowed, Keeping Up With The Kardashians, Knight Rider, Nashville, all those shows. I would do whatever they asked me to do because I wanted to learn. After twelve years of that, I started ghost producing for some popular EDM artists. I was writing for people who were making a lot of money in the EDM world, and I thought “Hey, I could do that too!” I switched over, and my first break was with Steve Aoki.

I’m new to the scene, but I have been making electronic music for fifteen, maybe seventeen years. I love the unity vibes in electronic music. We share sound packs and plugins between producers, and it’s very nurturing. People want you to grow and will show you what they’ve learned. If you do that with your friends, you all get a lot further. There is more power in numbers.

Could you tell us a bit about how you got your start playing music?

Basically, my mother was a classical piano teacher, and my dad was a singer. Growing up from two years old, I had to practice classical piano every day, for four hours a day, until I was 14. We grew up on the road with my dad on a tour bus. We were surrounded by jazz musicians. We were just surrounded by music my entire life. I didn’t really have a choice but to get into music. When I was 14, I stopped playing for a while. I’d been forced to practice every day, so I really started to hate playing. I would run away from home, and they’d call the cops to look for me, all because I didn’t want to practice [laughs].

Imagine if Melodics had been around.

This is why Melodics is so dope. When I was a kid, I had to practice playing baroque piano pieces, which I didn’t want to play. If I’d been able to practice songs I liked, it might have been a different story. In hindsight, classical music is really really good. It’s encoded with sacred geometry, and the mathematical makeup of the universe, so it’s good to learn that stuff. What I would have liked, would have been if it had beats or something I could move to. I needed a groove. I do a lot of music teaching work with teenage girls. I’ll take their iPods, see what they are listening to, decode it, and help them learn what they want to learn. Unless you’re learning something you love, you’re not going to want to learn it.

How did you go from stopping to playing again?

I started to party in the rave scene and was really inspired. From there it flipped very quickly to wanting to practice piano over dance music. I would take napkins and write down the music theory of songs I liked; then go home and try to recreate them. I was infatuated with the sounds I was hearing, but I didn’t want to practice traditional music, so I started practicing to house, dance, and electronic music.

Could you expand on your ideas about learning something you love into some advice for people starting out with their playing?

Find songs you love and learn them. They’re the ones that will inspire you. I learn the chord structure of songs, and I start to reverse engineer them. Then, I’ll make a completely different track that was inspired by one of them. When you study songs, you start to reverse engineer by default. You start to learn chord changes, patterns, and rhythms that you can incorporate into your own music. Eventually, you’ll just have this toolbox of turnarounds, changes, and rhythms you can mix and match into anything. Anything you are learning becomes part of your vocabulary. Music is a vocabulary, and you’re learning all these little phrases. You’ll have this toolkit of all the phrases you’ve learned you can pull out at any moment.