by Sarah Eades in Melodics

A sample pack is a collection of sounds that are designed to use as pre-made building blocks for producers to create music with.

These sounds usually consist of loops (a musical phrase that can repeat such as a guitar riff) and one-shots (a single sound such as a kick drum).

You can use them within any DAW (digital audio workstation) such as Ableton Live, Garageband, Logic or FL Studio. Many of these have a free version for you to use if you are just starting out.

Producers typically use sample packs as an initial starting point when creating a new song, or even as inspiration to explore into new styles of music. 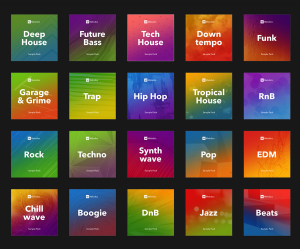 Melodics’ sample packs contain a combination of loops and sounds found in our many lessons, covering a huge range of musical styles. If you complete your practice with Melodics you might be lucky enough to receive a free sample pack as a reward for all your good work. We give them away on a regular basis!

To use a sample pack simply:

(As an example, if you have a Mac, open Garageband, create a new ‘audio track’ and drag one of the sounds direct from your finder into that audio track.)

You can now use your new sample packs as a starting point when producing music or even as inspiration to explore new ideas.

Give it a go, you could be on your way to creating the next big hit!!

The Seoul beat scene and the importance of community – with Lionclad

Growing up amongst the futuristic skyscrapers, rammed subways, serene temples, palaces and bustling street markets of Seoul, South Korean beatmaker, finger-drummer and DJ Lionclad always felt out of place. Things slid into place for her when she discovered trip-hop, abstract hip-hop, experimental music, and the worlds that surround them. With headphones wrapped around her ears, the psychedelic, late-night sounds of Björk, Portishead, Massive Attack, Cypress Hill, Morcheeba and Zero 7 let her reimagine life as a black and white film noir. Everyone else in the metropolis was at hyperspeed, but Lionclad was moving in slow motion.

“The music told me it was okay to explore the emotions inside me deeply, and made me realise that if I wanted to, I could focus on myself rather than everyone around me,” she explains.

“Growing up in an Asian country, you are always forced to be part of the community. That always made me feel more isolated from everyone around me, and the music gave me comfort and helped me realise my feelings were valid.”

These qualities come through in her moody beat production work and dexterous live finger-drumming performances, many of which you can watch or listen to through youtube and Instagram. They’ve won her a cult reputation around South Korea and set her up to take things further.

Lionclad was also equally fascinated by media art as a teenager and considered working in video before music. She loved vintage horror movies (“Creature from The Black Lagoon, Godzilla, The Blob, etc.”), anime, and quirky cartoons; genres often associated with music by way of sampling or direct references. In that era, the downbeat sounds of the UK and the bass of blunted west coast rap came packaged with fittingly trippy music videos, and it only took a few steps sideways for her to come across 90s IDM artists such as Amon Tobin, and South Korean trip-hop group Mot. Music made sense. Making and playing it would be her thing.

“I began arranging tracks in FL Studio and Cubase first, then I started taking samples from vinyl records with my MPC and creating loops,” she says. “From there, I started using the MPC as a performance tool to share my music. DJing came, later on, followed by Ableton Live.” 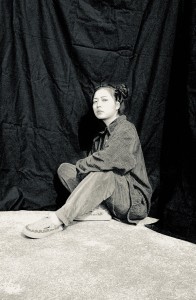 Looking for vinyl records to sample from took her to music stores around Seoul’s Myong Dong, Hong Dae, Itaewon and Gangnam districts, where she connected with, and learned from, DJ Son and DJ Soulscape, two pioneering local DJs with open-ears and similar musical interests to hers. They’d invite her to their studios for jams and listening sessions, and when they saw her fast-developing finger drumming skill level, helped her get gigs around the same districts. “Community was crucial for me,” she says. “I’d meet people, and they’d introduce me to other people I could play with. It’s also fun because you get to learn their stories in music and how they did what they did. It gives me a lot of inspiration around what I do now.”

Outside of the DJ scene, Lionclad also cites experimental artists like Kim Oki, Akimbo, 4kapas and Cifika as part of her community, and a reminder of what she prizes the most, the power of live performance and the moment. “The DJs and musicians gave me a lot of influence, but I wanted to give people inspiration by showing them how music can be made live, and how the beat is felt by tapping it with the fingers,” she reflects. “There are very few MPC players in Seoul, but I think it’s good because people think it’s a very special kind of thing that they can’t see easily.”

In 2016, Lionclad released her self-titled debut album. Since then, her work has been celebrated by GQ Korea and Playboy, and she’s found herself collaborating with an array of rising K-pop and K-rap vocalists including Muddychild, Danny Roots, Taedo, SSamdark, Yumdda, Jvcki Wai, Justhis, Sogumm, Kimximya and more, bringing her moody production sound into those melodramatic realms. She also took part in the Red Bull Bass Camp Seoul in 2017, began creating lessons for us at Melodics in 2018 (see her lessons here), and is working towards a second album. Although trip-hop, beats, and abstract hip-hop still don’t have a large audience in South Korea, more recently, Lionclad has been sensing a cultural sea change, one she’s very excited about, and hopes will take her overseas sooner rather than later. “These genres are still not that common here,” she admits. “But it looks like people these days are finally ready to accept uncommon things.”