Do any of these resonate with you personally?

Learning anything, especially an instrument, requires plenty of dedication. Not everyone is prepared for this, and can at times find themselves overwhelmed. If this sounds like you, we’re here to say: don’t give up! This article is here to show a path that can help you progress towards any goals you have. How? By rewiring your habits.

Habits present a way to demystify how some people are seemingly on an effortless trajectory for success. Though there is always a degree of effort required (regardless of how apparent it may seem), luck certainly doesn’t factor much, if at all.

There is a lot of info in this article, but if you take the time to think on what you’ll learn in these 5 steps from time to time, you’ll be able to translate any aspirations you might have into habits: the actionable, bite-sized steps you can use to achieve success.

Think of your own personal goals as you read this too. It’d be interesting to note if how you define them changes!

STEP 1: Defining your idea of success

Having a broad aspiration is great! After all, you can’t improve without challenge. But it’s at each step within the process of reaching that ultimate outcome where you should define multiple successes.

Why? Aspirations as goals are inherently lofty  — they’re not dreams, because there is a real chance of you achieving them. But depending on how complex or ambitious your goals are, it can be difficult to see a potential path towards actually achieving them — so instead, the route you do end up taking is often met with frustration, feeling overwhelmed, or simply not making the progress you want. Treating aspirations as dreams is not a path to success.

Define success by your habits, not by your goals.

Defining your concept of “success” solely by an end goal isn’t necessarily an effective way to make good progress. It may even set you up for avoidable disappointment. To summarise Tony Robbins (love him or hate him), “that’s trying to eat the whale whole, without taking smaller bites”.

Instead, consider your system of habits: the required process as a whole of how to actually get to your end goal.

As an example, your end goal might be focusing on buying your dream instrument — so one chunk of that system of habits might be setting aside some of every pay cheque to start saving. A second habit in the system might be ensuring you don’t spend those savings elsewhere in the meantime!

STEP 2: How are Habits Formed?

This step is aimed at deepening your background understanding of habits and what makes them a recurring system: how they work, form or are broken. Let’s drill down.

“You are what you repeatedly do”

As animals we’re sort of wired in a constant pursuit of feeling rewarded.  This behaviour not only satisfies us and satiates cravings; it evaluates which actions best satiate these cravings, so we can learn and repeat them. This is a 4-step perpetual cycle of learning we call the Habit Loop. 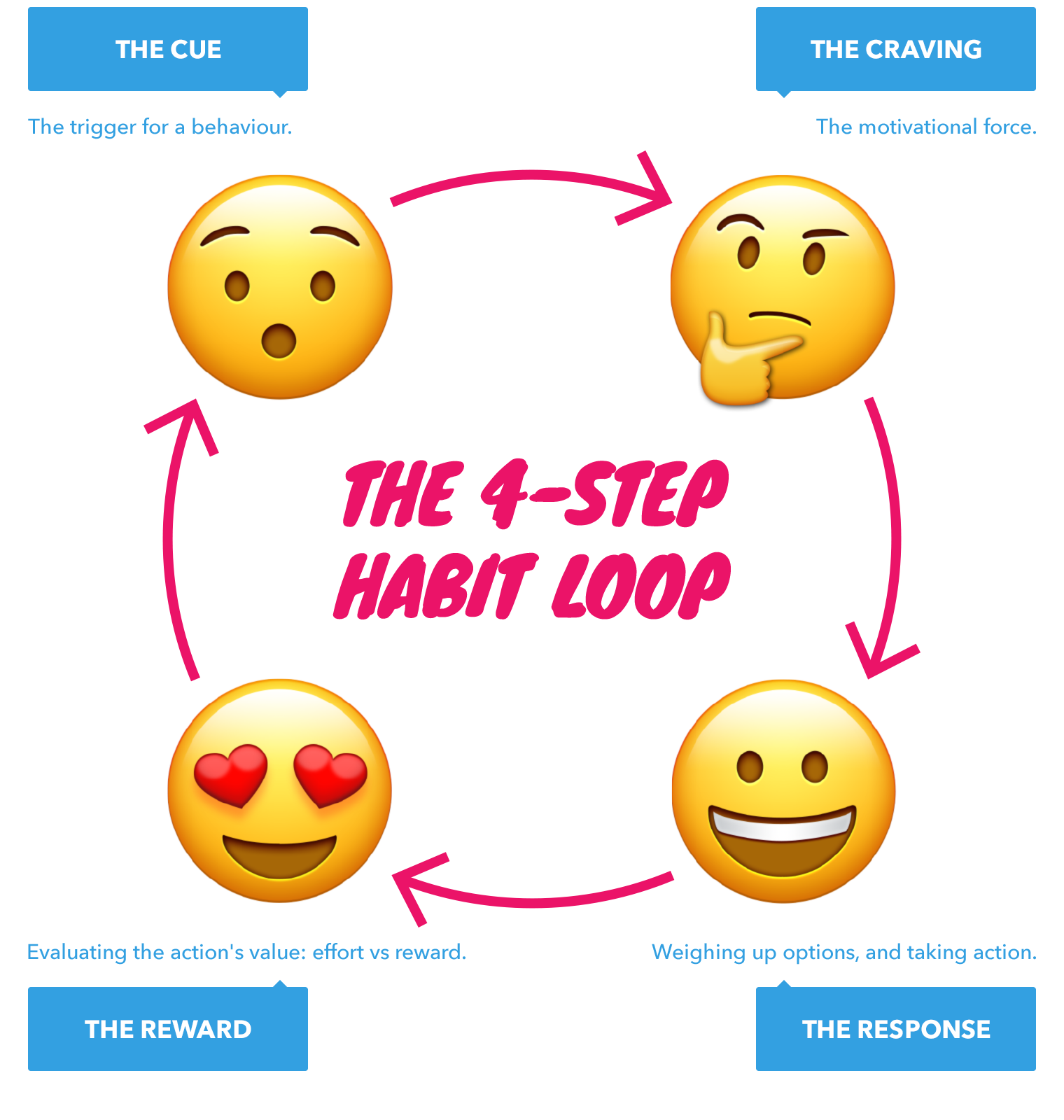 How are habits broken?

Habits break just as they are formed! Successfully-formed habits have an obvious cue, an attractive craving, an easy-to-do response, and a sufficiently fulfilling reward.

Your brain is constantly weighing up the benefit at each stage: evaluating friction and motivation, urgency or ability to respond against the ultimate reward.

If a habit loop can only occur if all 4-stages of the criteria are successful, then breaking the cycle and preventing habits could be done in theory as simply as removing or reducing one or more stages:

This episode of Hidden Brain is a fun little podcast that might give you some good tips on behaviour! Here, guest psychologist Wendy Wood shares some of her research into habits; how to build good ones (and break the bad ones.) As an anecdote, she would actually sleep in her running clothes to reduce the friction of going for a run. Go figure…

The 5 miles presents friction. The 3.5 miles is much less friction and makes the behaviour more likely.”

So now you know about the habit loop, why you have certain habits, and how they’re broken — you might be considering your current goals, and how you could begin to harness knowledge of habits to create a different version of yourself.

Whilst the urge to enact sweeping, profound life-changes is natural, often it’s far more effective to alter existing habits incrementally, than it is remove or form completely new ones. Use the 4-stage loop of your current habits to your advantage!

“Small adjustments make a massive difference to your life”

If you use habits to make tiny 1% improvements to one small thing on a daily or recurring basis — over the course of weeks, months and years, you end up being multiple times better than where you started. No matter how small, every 1% change is a success, and something to acknowledge or celebrate.

Habits also present a small chunk of changeable behaviour — but beware the temptation to “over chunk” and become overwhelmed by the minutiae of steps involved in enacting change.

Here’s some easy tips on slightly altering an existing habit’s cue, craving, response or reward, to make change and progress easy and achievable. You don’t have to do all of them, you can start as small as just picking one:

“Missing once is an accident. Missing twice is the start of a new habit.”

No-one is too big to recover. Musician and Melodics user Gretchen King perhaps describes it best from her own experience in falling off the wagon after having practiced for 300 consecutive days:

“One night at midnight, I realised that I had forgotten to practice that day. I was so bummed that I didn’t practice for a month! Then I realised that while a streak is amazing, it’s more about putting in the work and enjoying the process. I quickly got back on track again.”

Habits aren’t all-or-nothing: habits certainly change, evolve or lapse with time, so don’t stress it too much if you can’t keep it up consistently. You can absolutely recover if and when a routine breaks down; if you can’t get back on the horse and continue from where you left off, re-evaluate your purpose and set new 1% goals to get back to where you want to be.

Ready to transform your own musical habits? Here’s a handy exercise to go through of everything covered in this article:

If you’re dedicated to updating your habits and working towards meaningful, personal success, consider what your responses to this exercise would be, and use your answers to set yourself daily or weekly goals in an obvious way.

STEP 5: Doing something with your Habits.

By changing your habits to be what you actively want them to be, you’ll find your own identity starting to evolve as well.

It’s a subtle distinction that might even sound obvious. But realising that clear personal identity helps you identify as part of a select community or a tribe; where you have the mandate to do all that other stuff you’d be expected to do. Stuff which also helps you on your way to reaching your goals. Is your goal to run a marathon? Great! You’re part of a tribe of “runners.” Is your goal to “be able to play the keyboard part all yourself from one of your own musical compositions?” Then your identity could be “I’m a keyboardist.”

Why join the tribe?

Nothing fosters motivation like belonging to the tribe does. Having fun together helps, but social reinforcement and obligations doubly so! If your personal goal is transformed into one shared by a group, your identity becomes linked to those around you, and you all work together to support and sustain each other’s identity. Development and progress is no longer your individual pursuit. Now it’s: We are musicians. We are a band.

“Musicians should go to a yard sale and buy an old fucking drum set and get in their garage and just suck. And get their friends to come in and they’ll suck, too. And then they’ll fucking start playing and they’ll have the best time they’ve ever had in their lives and then all of a sudden they’ll become Nirvana. Because that’s exactly what happened with Nirvana. Just a bunch of guys that had some shitty old instruments and they got together and started playing some noisy-ass shit, and they became the biggest band in the world.”

There’s a tribe waiting for you:

You like playing music live? Join a local band, association or attend open mic nights or just support the community and watch their live shows.

More into producing? Collaborate with like minded musicians check out Kompoz or the myriad of Music Producers sub-Reddits.

Melodics derives a lot of inspiration from the teachings of James Clear, both in how we’ve developed our music education app and the design of our curriculum, but also in how we conduct our every day lives as musicians — and hence the advice written in this article (it’s littered with his quotes!). We’d say that if you’re serious, his book ‘Atomic Habits’ is a must-read; and his blog provides some fabulous insights into the science of habit, motivation and productivity, decision-making and creativity.