We’re on the Halloween hunt for spooky rhythms

You’ve probably heard about minor scales in music, and how they’re used to portray feelings of darkness and apprehension. (If not, read this!)

But melodies only make up half the story in music. What about the rhythm? Is it possible to evoke dark and scary emotions with patterns, phrasing, and time signatures alone? With Halloween just around the corner, there’s no better time to answer the all-important question: what makes a rhythm spooky?

Answering this question is a bit like hunting a ghost. You’re not too sure it exists, but you’re in it for the thrill of discovery. Let’s uncover some truths by looking at famous examples of spooky music:

Exemplified by a simple alternating pattern of just two notes, the theme for Jaws instantly sends shivers down your spine. What makes the rhythm of this music so fear-inducing?

It begins with a sparse pattern of two notes per bar, with long rests adding to the suspense. Then the tempo starts to build. The rhythm becomes more regular but is accompanied by sharp off-beat bites to keep you on your toes.

Featuring a seemingly simple eighth-note pattern, what is it about this rhythm makes it so spooky? Let’s break down the complex arrangement of notes.

Instead of using different length notes and rests to create rhythm, The Exorcist Main Theme gains its rhythm through the arpeggiating pattern of notes. It’s actually the melody that gives this song its irregular rhythm.

Let’s look at the note E in this pattern, (the lowest note highlighted in green). Notice how it’s on the off-beat of the first bar, on beats 1-& and 2-&. Then it switches to an on-beat rhythm on beat 4, continuing into the second bar on beats 1 and 2. Then back to off-beats in bar three, etc.

We’ve seen how irregular rhythms can generate suspense and tension. Equally, regular rhythms can evoke similar feelings. The main theme for Halloween is backed by a straight quarter note pattern on each beat of the bar. So what makes it so spooky?

The unusual 5/4 time signature brings suspense. 4/4 time signatures feel natural and pleasing. 5/4 has one extra beat to every bar, giving it a strange and slightly uncomfortable feeling. The regularity of the rhythm is also akin to a heartbeat, giving the song a chilling sense of mortality.

So, what makes a rhythm spooky?

It’s complicated. There are elements of rhythm that can evoke dark and moody emotions. For example, irregular rhythms can build anticipation. Unusual time signatures and off-beats can generate tension.

The effect that rhythm has on your music is often overlooked, but there’s no doubt that rhythm is a powerful compositional tool. Having these tricks up your sleeve will help you invent new and interesting ways to portray emotions in your music.

Put it into practice.

Get inspired with these Melodics lessons. For the drummers out there, discover how to use unconventional phrase lengths in the context of a Spooky Surf Rock course.

Or learn about shifting off-beat kick patterns with these Scary Psychedelic Rock lessons.

What do you call a zombie who writes music? … A decomposer!

Ok ok, but what about a zombie who is just trying to write a satisfying chord progression while playing in a minor key? (Because zombies don’t play in Major keys).

For maximum satisfaction, this zombie might consider reaching for something called the “harmonic minor scale.”

When you think of the most satisfying chord progressions in a major key, they often end with something called a 5-1 cadence (also known as “dominant” or “perfect” cadence).

This is where you play the 5 chord (the dominant or V chord) which sets you up for a strong resolution on the 1 chord (or “tonic” or I chord). In the key of C Major, a 5-1 cadence is G Major to C Major. Listen to an example of that sweet dominant cadence in this ii-V-I chord progression.

We’re going to show you how to give your music maximum thrill-factor by getting all the benefits of a major-sounding “dominant” V-I cadence, whilst still keeping things spooky by playing in a minor key scale. 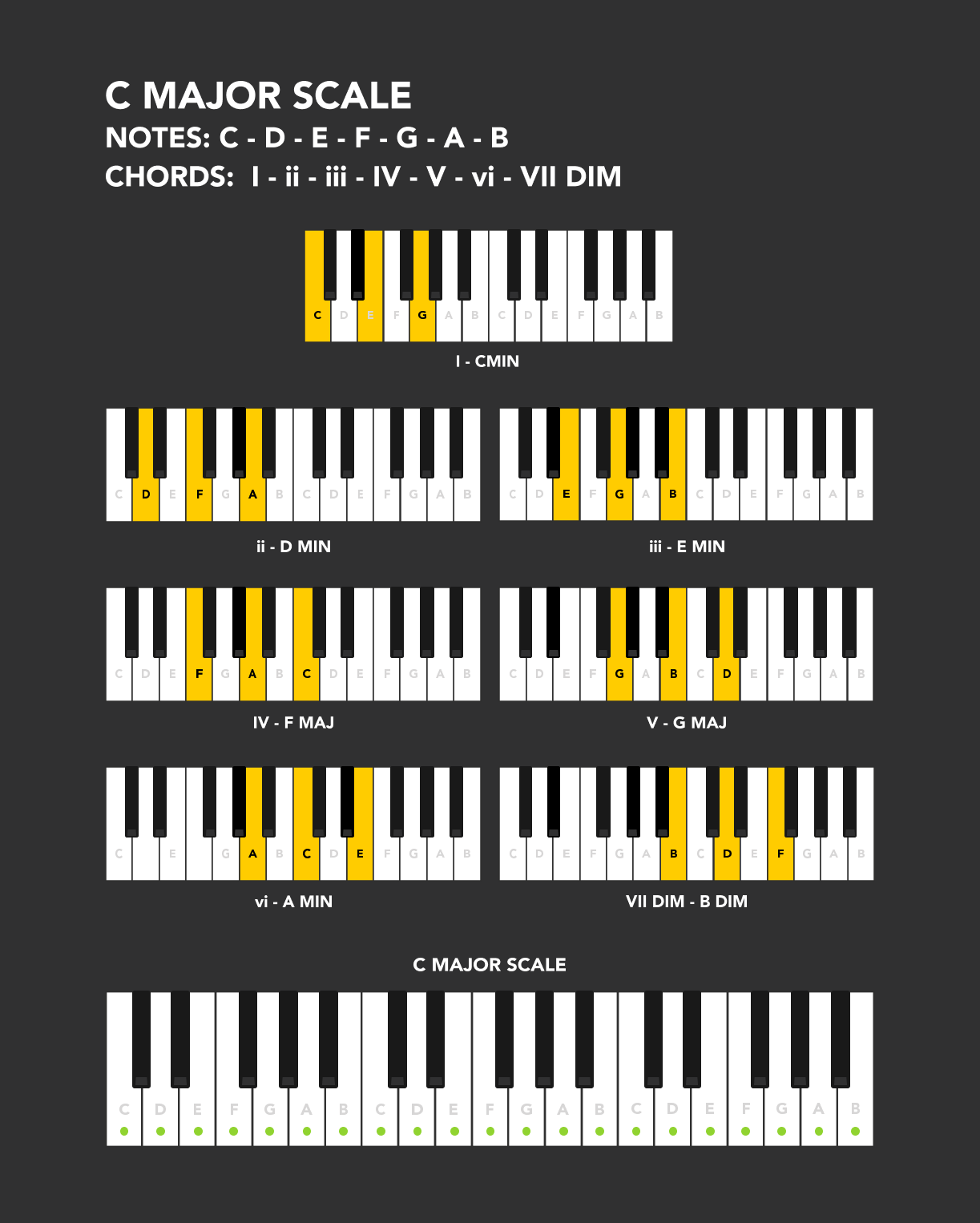 Here’s how the pattern of chords on each scale degree in a Major key goes: 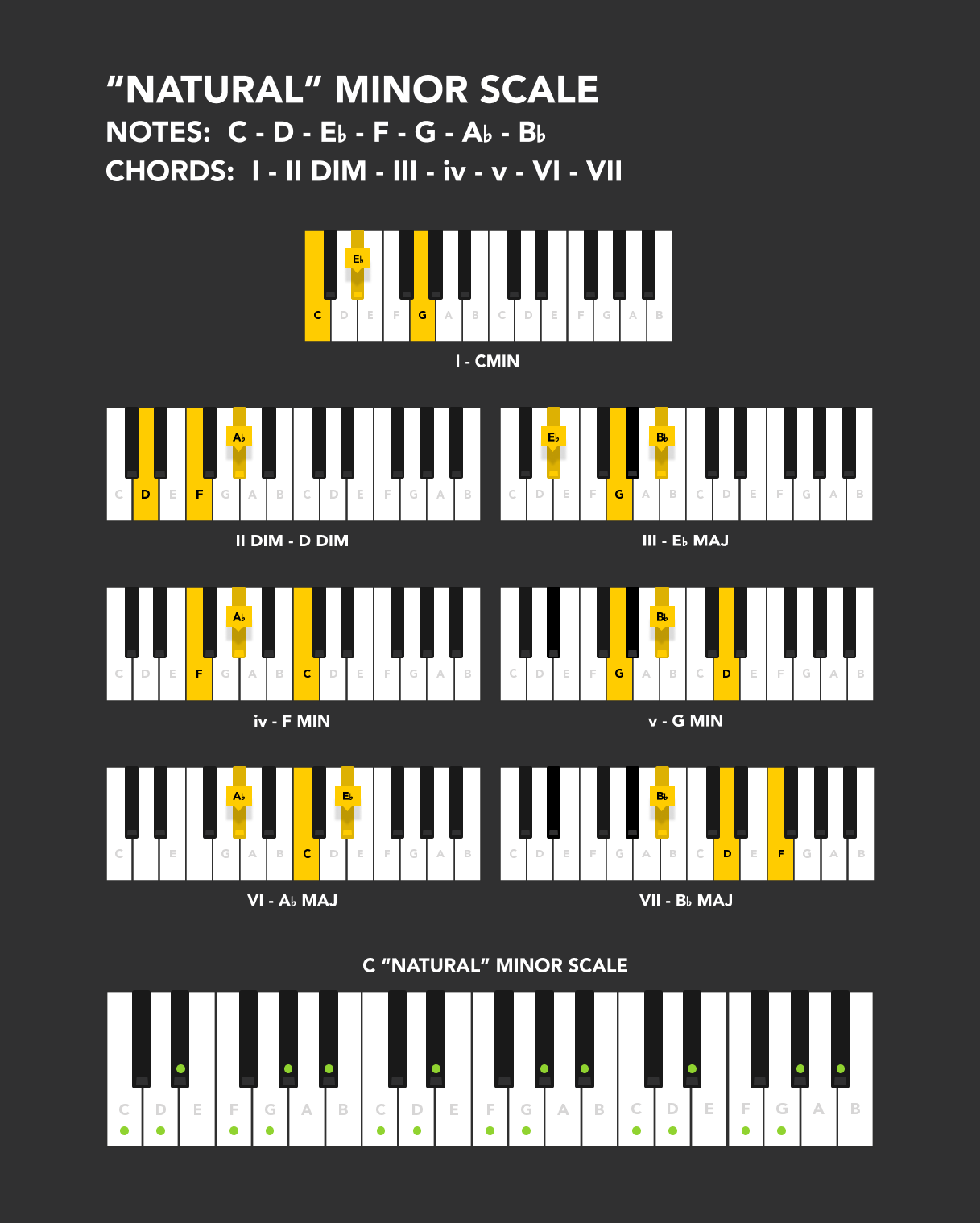 But when you’re in a minor key, the chords are going to be a little different.

In natural minor this pattern is:

As you can see the 5 chord in the minor scale is a minor chord, so the satisfying 5-1 cadence is not so satisfying anymore. There is not the same tension and release, and it can feel a little lack-lustre. For more oompf, the 5 chord needs to be Major. 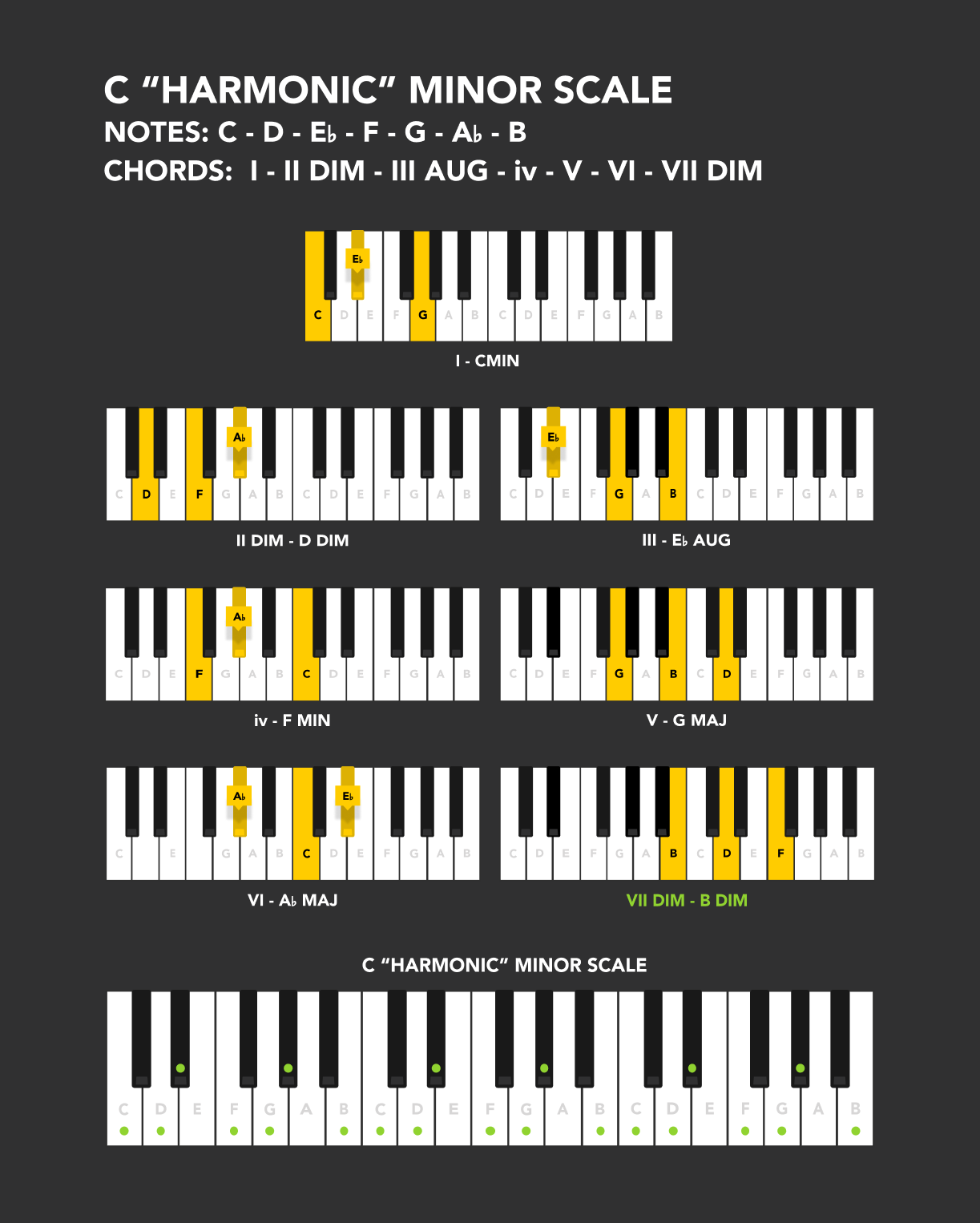 The way we can get around this is with the harmonic minor scale.

The harmonic minor scale is almost identical to the natural minor scale — there’s only one note different, but it makes a big difference in how the scale sounds.

Now instead of the 5 chord being G minor (as you find with the natural minor scale), with the harmonic minor scale it’s G Major which brings the life back to the 5-1 party. You could say it’s re-animated 😱

In most popular songs, this is how the harmonic minor scale gets used. While the song is basically written normally in the minor key, to make the chord progression work “better” the minor 5 chord gets changed to Major. A simple trick!

That’s cool for chords and the undead. But what about the melodies to play over them?

The raised 7th degree in the harmonic minor scale is pretty cool (that’s the difference between the minor and major third when you’re playing the G major 5 chord). Instead of a whole-step between the 6th and the 7th, it’s now 3 half-steps (also known as an augmented 2nd — or minor 3rd). Having such a wide interval between these two notes is unusual in western music, which is what gives the harmonic minor a pretty exotic sound (some might say Spanish or Arabic) which can also sound mysterious or spooky to some ears. Give it a try! 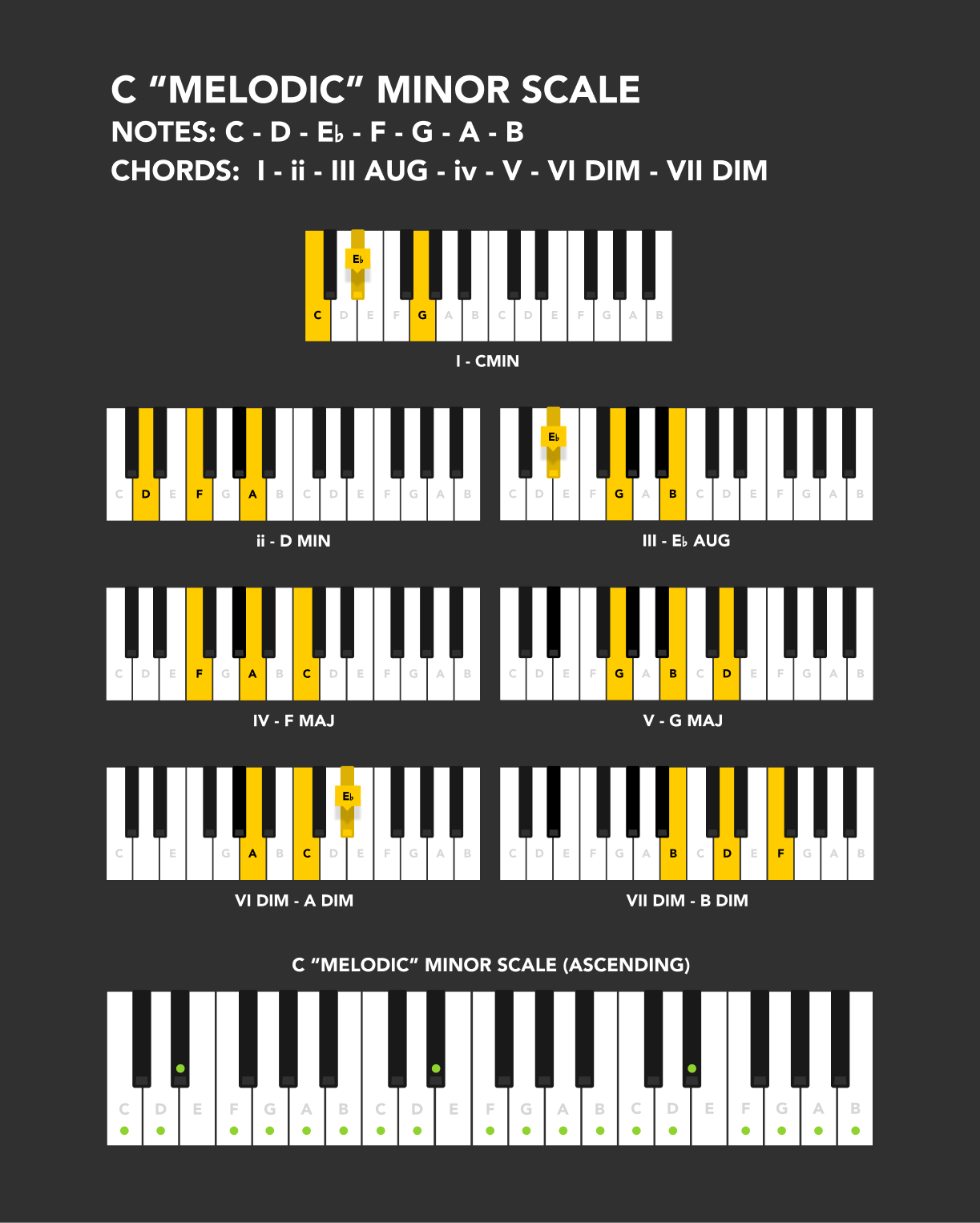 This is great if we want to use that creatively, but if we’re wanting something smoother without all the baggage and expectations which can come with something sounding exotic, we can turn to the equally-evil minor twin: the melodic minor scale.

This scale is similar to the harmonic minor, but gets rid of that minor third sound. To achieve this, we also raise the 6th degree of the scale by a half-step. Now the interval between the 6th and the 7th is a whole step again so it sounds much smoother. In fact, when you compare a melodic minor to the major scale side by – the only difference now is the minor 3rd note.

Reviewing all the scales 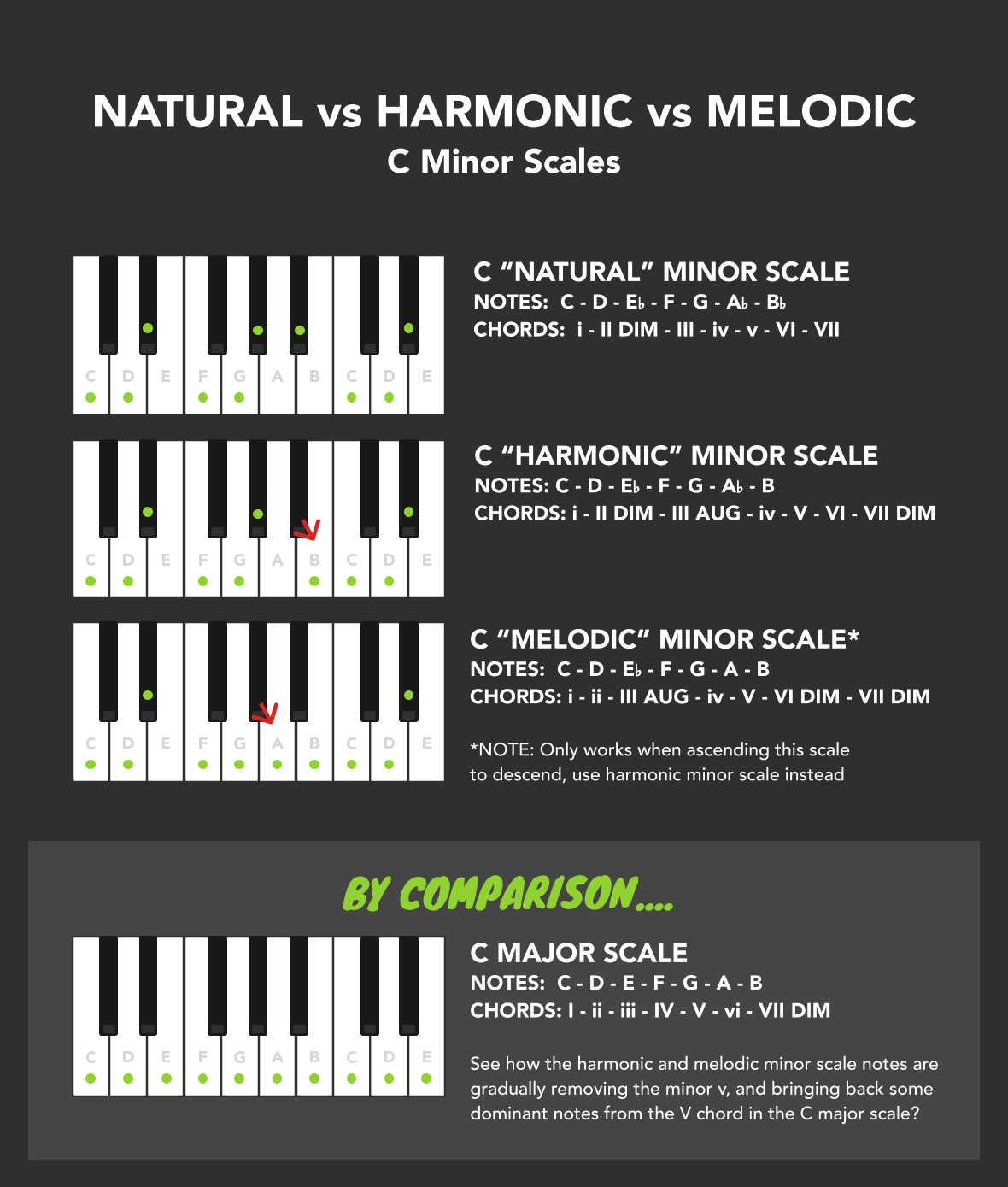 Here’s the weird bit. Given how close the scale is to the major, you play the melodic minor scale differently going up vs going down, but we won’t go into that here…

But this is the best thing about the minor key! With all three of these minor scales at your disposal, you can blend or combine elements from each at any time you like to lend what you’re playing different flavours.

Learn to play all the minor scales 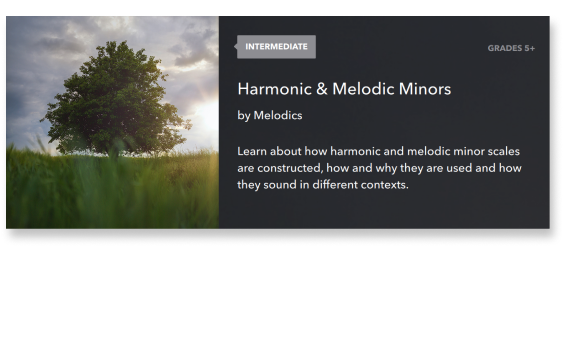 So here’s something to learn for Halloween! The Harmonic & Melodic Minors course is in Melodics to teach you:

If you’re not at your instrument right now, here’s a playlist of music to start prepping your ears to the sounds of the minor scale family. Remember to keep your ears peeled for whether or not a dominant V-i cadence is being used instead of the natural v-i minor cadence.