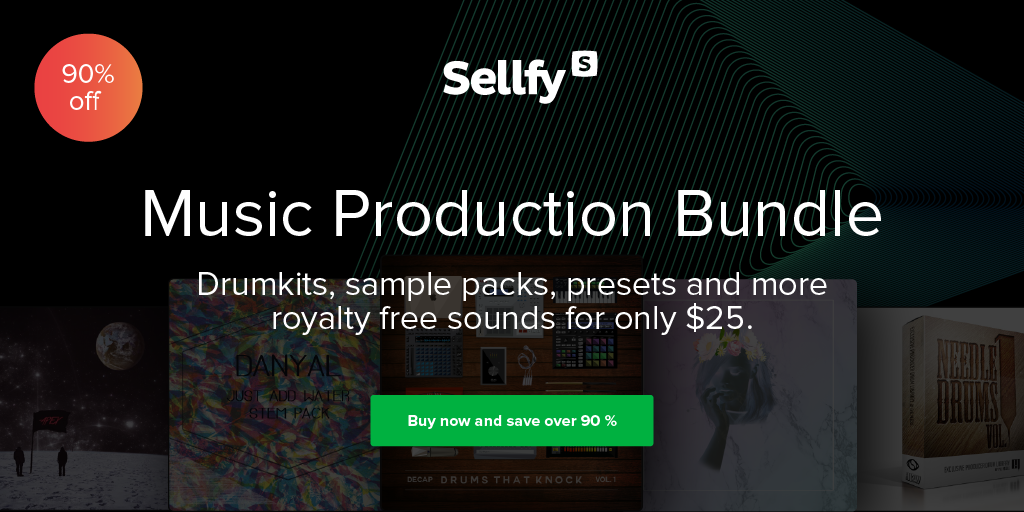 Need new sounds for your production library? Well you are in luck. Our friends over at Sellfy present the Sellfy Music Production Bundle. Including premium sounds from Decap, Evil Needle, Danyal, Brightest Dark Place, Juku and Steklo Acapella this bundle is essential for aspiring producers.

In the bundle you will get:

All these products come with Sellfy Music license, which means everything inside can be used completely for your creations.

This pack is usually priced at $260 but is currently available at $25 for a the next 24 hours.

In our second ever instalment of Beat Breakthrough we talk with San Francisco based producer Decap. When it comes to making beats Decap goes way back making his start at just 13 years of age. Find out about three beats that have shaped Decap’s progression as a producer.

What is the oldest or one of the older beats that you can find? Tell us the story behind it.

Beat Name: “Believing in D.E.A.T.H.”
I made this beat in the summer of 2000 at age 15 when I started getting serious about making beats. I made the drums in a really old version of Fruity Loops and recorded the sample chops on my Boss SP-202 into Cool Edit 96. I can’t remember the exact sample, but it was off a record I bought at a local flea market.

A beat that represents a turning point in your production career?

Beat Name: Feeling
I made the skeleton of this beat in 2014 in like 10 minutes. I ended up releasing it as a single in 2015 (after spending 3 months tweaking it), alongside a video of me performing it on Push with Ableton. I feel like this track helped solidify my solo music career. A transition from behind the scenes producer, to artist and live performer.

The latest song or beat you are most proud of. And why?

I just made this beat this year. I feel like the music, sonic quality, and quirkiness represents where I want to take my sound. I’m proud of this track

An Interview With Decap – Talks Production Techniques, Ableton & His Career So Far

When asked in the past about what advice you would give to upcoming producers you said “Create something new every day, and release new material frequently to build a momentum and a following.” Are you able to give a bit more depth into these steps or add anything you’ve learned since?

One thing I would add to that is: be yourself and create authentically. Make the music that moves your soul, and avoid trying to force your art to fit a mold. Avoid people, situations and career paths that influence you to conform so much you lose your authentic voice.

How does the BOSS SP-202 Sampler, a Tape Deck and a HR16 Drum Machine fit in your production story? How have you grown equipment and sound wise since then?

At the time, my workflow was to sequence drums on the HR-16, loop it, then trigger samples in realtime on the SP-202. I was 13, just starting out, and didn’t really understand MIDI at the time, so there was no quantization and everything had a really raw feel. There was no looping on my 4 track tape deck, so I had to make the whole beat in one take, part by part.

Once I started getting into the power of desktop computers for production, everything really changed. I started using Cool Edit Pro with a program called Tuareg (by Hammerhead). I would sequence the drums in Tuareg, load the drum stems into Cool Edit Pro, then copy and paste samples in time with the drums. People thought I was crazy for making beats this odd, complicated way, but I made some bangers and was able to capture the sound I wanted. After years of making beats this way, I got into Reason for a bit, then the MPC 4000 which was a game changer at the time. My main setup for a while was the MPC 4000 with some hardware sound modules.

Now my setup is really simple: Ableton Live 9, Push 2, NI Komplete Kontrol… and my newest addition – the Dave Smith Tetra. This setup allows me to work in the studio, and have a portable setup I can take anywhere with a backpack. As I expand as an artist, I continuously discover new ways to create in Ableton.

You performed an amazing video of your single “Feeling” for Ableton back in 2015. Explain the process of performing that video and how your relationship with Ableton began?

Push’s 64 pad mode was in beta at the time so coming from the 16, I had to learn a new skill before shooting. I wasn’t used to finger drumming with two hands. There was no quantization in my performance and the video was shot in one take, so I was forced to nail it all the way through with no mistakes. It was a lot of pressure, but I definitely grew from it.

Back in 2013 I did a YouTube video collaborating with Ski Beatz, while showing him Push. Ableton picked up the video on their site, and our relationship has continued to grow.

You’re first ever Melodics lesson teaches “Feeling” and how to perform it like you did in the Ableton video. What can Melodics users expect from this lesson? How will it help their skills?

If you want to learn or get better at finger drumming and performing live, practice is the key. I partnered with Melodics to put this lesson together because I feel its a great tool for artists to step up their performance skills and have a great time. Like anything, the more you practice, the better you get.

You took three years out of music between 2009-2011 to find yourself through spirituality and meditation. Out of this came the project ‘Omnilove’ which you have said “embodies the essence of what you are trying to communicate”  Explain this process of taking a hiatus from music and how it has served you both personally and musically since your return in 2011?

That time was a strong wake up call. I dropped everything in my life to experience who I was on a deeper level. I was looking for my purpose. I hardly made any music during that time. This hiatus from music turned out to be revelatory. Because of it, I am definitely more focused. Coming through that helped me to create and hold a bigger vision for my life and art.

You mentioned in a previous interview it was the likes of Snoop Dogg and Dr Dre that made you begin your production journey in the 9th grade. What is it like years later producing a track that your influence Snoop Dogg was featured on called “The Weekend”? I can only imagine it must be quite surreal things coming together full circle like that.

You have a drum pack online called ‘Drums That Knock’. This came about  after being repeatedly asked how you get your drums to knock by your fans over the years. Outside of getting this pack are there any other production techniques you would suggest to get those drums cutting through the mix?

Some techniques that work well are a mixture of compression, saturation, pitching and crafting the transients. I use a lot of soft limiting (but never letting the signal clip). My advice to sound designers is to take some time and mess around with plugins. Use your ears. Try boosting, cutting, distorting, shaping, layering. Try things that seem unorthodox – create a sound that is unique and never been done before.

I wanted to create a kit that producers can load up and that inspires them to take their mix and sound to the next level.

How did you get involved with Melodics? In what ways do you think Melodics will help the next batch of producers and beatmakers?

When I started performing, I specifically remember wishing for an app that would help me practice finger drumming, but I couldn’t find anything like it. Recently a buddy of mine introduced me to Melodics and I checked it out and thought it was dope. I really appreciate what Melodics is putting out there. This is a great tool allowing producers and performers to get good fast with structured lessons.

You are a massive Ableton and Ableton Push advocate, with this combination giving you a live performance element now. Are you able to talk about how this has helped your performance skills and how the art of finger drumming ties into this?

Before Push came out in 2013 I thought of myself more as a producer than a performer. After rocking Push for just a few months, I shifted towards crafting live performances because I realized its always been natural to me to perform. Freed from the computer screen, Push becomes an instrument and it’s a matter of mastering that instrument.

What does the rest of 2016 have install for Decap?

I’ll continue to release new music every month. I have a couple secret projects in the works. I might drop another drum kit ondrumsthatknock.com … we’ll see ;).

If you were stranded on an island for a year and could only bring three records with you what would they be?

Kendrick Lamar – To Pimp a Butterfly